The Story of Supriya Mondal
BLOG

The Story of Supriya Mondal 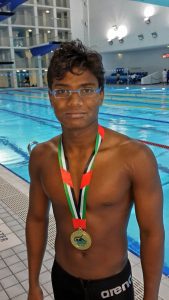 In October 2012, at the INK Conference in Pune, I told the story of a young man who had a love for water and dream of one day representing his country.
The story of young Supriya Mondal, a boy from a little fishing village outside Calcutta, left the curated audiences speechless, not because of my delivery, but because it was a story that embodied the courage of a sportsman.
Courage is the mark of success; it is for those who challenge the status quo and push the limits, sometimes to the point that the limits push back.
Supriya was no exception to the rule. He hailed from a remote village, to humble parents who struggled to fund his passion for swimming. With an annual family income of INR 48000 a year, paying 1 Rupee per day for swimming pool access was not a luxury they could afford. Undeterred by their circumstances, Supriya took to the nearby waters where he honed his skills, to the point that he not only won the Indian National 200 m Butterfly title but set a new course record in his age category.

It was truly the story of a child who refused to be deterred by adversity in his quest to fulfill his dream. A story of courage, discipline, perseverance & humility.
Its been two years since that conference. Two long, hard years which saw Supriya leave his village to settle in Bangalore under the watchful guidance of the Go Sports Foundation. The Go Sports Foundation supports and empowers athletes across numerous Olympic Codes, by allowing them access to professional expertise, high quality coaching and world class infra-structure – the bare minimum requirements to produce a champion.
Its foundations like these that have for long nurtured India’s talent and produced champions, the likes of Abhinav Bindra, Sushil Kumar, Saina Nehwal, Mary Kom and many others.

In the recent Dubai International Aquatic Championships, Supriya Mondal achieved an ‘A’ qualification mark in the 200m Butterfly event with a time of 2:03.93s – a time that not only saw him win the event, but also secure a position in this years Youth Olympics in Nanjing, China. Supriya Mondal is to date the only Indian athlete to qualify for the Youth Olympics – an achievement that bears testament to his hard work, courage, discipline and will to overcome adversity.

Supriya Mondal is indeed a true hero and an inspiration to the millions who continue to believe.
Surpiya – We Salute You!!!
On how to improve college writing according to vulture, a 23 ResumeCVWriter year old graduate student named sakurai asked murakami this question murakami-san, hello.